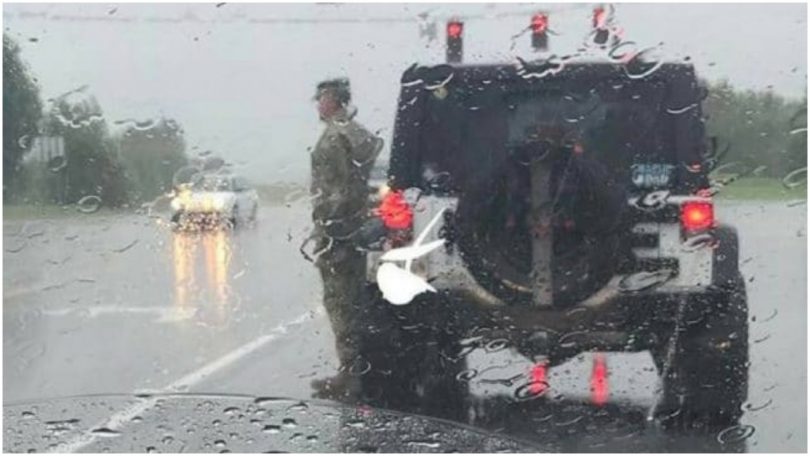 In what started as an ordinary drive home in the rain in Kentucky, soon became a viral inspiration. Last Thursday, while Erin Hester was driving on her lunch break in her hometown of Vine Grove, Kentucky (near Fort Knox Army Base), she saw a soldier get out of his jeep and stand at attention at a passing funeral procession — a moment she posted on Facebook.

In today’s society, many things that were once common social knowledge have been forgotten or their practice has fallen to the wayside. Men usually don’t stand whenever a woman leaves the table, children don’t often wait for their elders to be served before filling their plates.

While not participating in these customs isn’t wrong, per se, it is arguable that much is lost when we forgo these traditions and signs of respect.

One such custom that has largely fallen out of use is the respect shown when a funeral procession goes by. I would venture a guess that most people nowadays don’t even know what the proper procedure is when they see a procession going by. 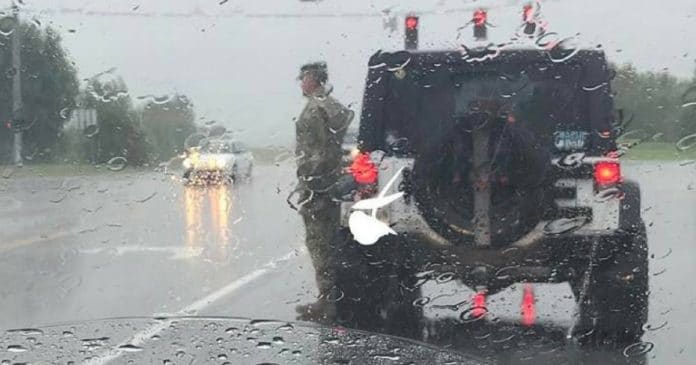 That’s why when we see people going above and beyond to show respect, it touches our hearts deeply; and that’s exactly what happened when Erin Hester was driving through town recently.

It was pouring rain as Erin drove, which is why she was surprised to see a man standing on the side of the road next to his car. As she got closer, she realized the man was a soldier in uniform and he was standing at attention.

Erin looked around to figure out why the soldier was doing this, and that’s when she saw a funeral procession slowly driving by, their headlights all on.

As soon as Erin saw the procession, she too pulled over to the side of the road to respectfully let it pass. When she got home later, she shared her story on Facebook.

“I always get frustrated when I see cars that don’t pull to the side and stop for a procession,” she wrote, “but this gentlemen went above and beyond.”

Erin said she is “pretty confident” that there are no military rules requiring a soldier to do this – and we weren’t able to find any either – this man was just showing honor and respect because it was the right thing to do.

“This made my heart happy to see the amount of respect that this gentleman showed a family that he doesn’t even know,” she said.

Many other people were touched by Erin’s photo and story.

Brandi Guillet commented, “I’m so glad you captured this. This young man was raised [with] love and respect in his heart.”

Others shared stories of similar experiences and wrote about how much those moments had touched them.

“When my dad passed away we were following the casket through a not wonderful side of town.. we passed a bus stop and a man who was waiting for the bus stood up and took off his hat,” Victoria Archibeque recalled. “I cried and it took everything I had to not go hug him. It’s amazing when someone does something for nothing in return.”

While we may never know this soldier’s name, we know he didn’t do this for the recognition. What we are sure of is that his display of honor and respect that day meant more to the grieving family – and the others who saw him – than he could ever know.

Were you touched by what this soldier did? So share this!