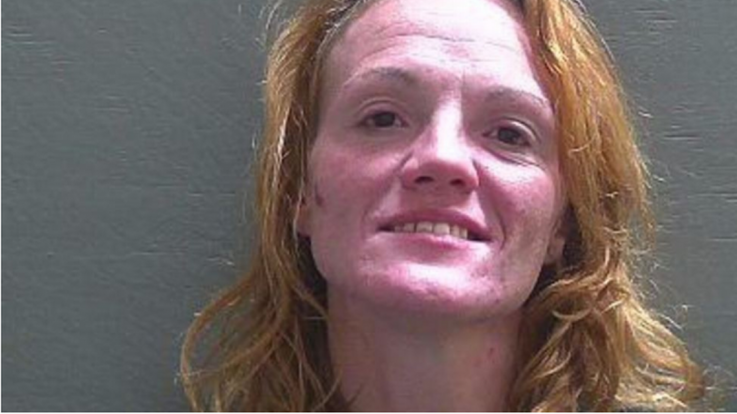 A half-naked Florida Woman was arrested early Monday after she pulled down her pants and began dancing around in the parking lot of a Waffle House in Pensacola.

Before her performance ended, cops report, Freedom Ryder Zobrist, 38, sought to grab the genitals of a restaurant manager before licking the man on both sides of his face.

When Zobrist was first asked to leave the Waffle House property, she became verbally abusive and allegedly threatened to “retrieve a firearm” and shoot workers and restaurant patrons.

Pictured above, Zobrist declined to answer police questions. Cops reported that witnesses told them Zobrist had “pulled down her pants exposing her sexual organs and started dancing around the parking lot.”

Zobrist was charged with multiple crimes, including assault and lewd and indecent exposure. She is being held in the Escambia County jail in lieu of $800 bond.

Upon Zobrist’s release from custody, a judge has ordered her to stay away from Waffle House and barred her from using of alcohol and unprescribed drugs.