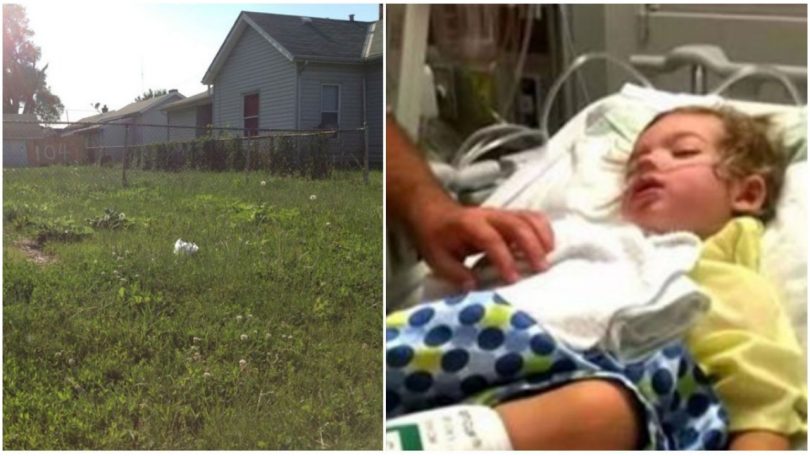 When Collin’s mother, Stephanie, woke up and went into their toddler’s room they instantly noticed something didn’t seem quite right. Her son was usually very energetic and excited to start his day off. He should be jumping around in his room, outside in the yard or playing with his toys. However Colin was in his bed, laying on his back staring at his parents. She immediately called her husband, Dillion, back home.

That’s when the two finally figured out what was wrong. Their son had become paralyzed overnight. Colin’s parents Dillon and Stephanie were in absolute shock, but after witnessing their son struggle to stand up, let alone walk they knew there was no other explanation.

The two then decided to frantically figure out how Collin may have had this happen. The night before he had accidentally hit his head before his brother’s baseball game. Perhaps the injury caused a concussion or something similar? The two parents assumed he was fine as he showed no serious signs of pain the night before. Right after he banged his head, he quickly got back up and shrugged the incident off. Without much thought, the parents thought it was a normal bump that children inevitably get.

However their son didn’t show any signs of a concussion. He was able to talk very well, he wasn’t sick and wasn’t suffering a headache. Yet he was still unable to move properly. His parents became increasingly worried and decided it would be best to get him to the emergency room first rather than attempt to diagnose him on their own.

After being rushed to ER Collin underwent several tests. The doctors were able to confirm that Collin was not suffering from any brain damage. This was a big relief for his parents, but the reason for his paralysis still remained a mystery for his family and doctors. The doctors continued to test him to find out what was happening inside this 3-year-old boy.

Unfortunately, as he underwent the tests, Collin’s condition worsened. Dillon, Collin’s father, was heartbroken to see his son struggle.

The only thing he could was breathe.

His son had gone from being unable to walk to being unable to move any muscles below his neck. He was even struggling to eat and drink. The doctors continued to run their tests ever so urgently as they were racing against the clock.

The boys oxygen levels continued to drop and the doctors decided they would perform a spinal tap to rule out meningitis. Unfortunately the result was bittersweet like every result before it. He wasn’t suffering from meningitis,however the mystery cause of their child’s paralysis remained unsolved. Dillon and Stephanie were forced to watch their son’s condition get worse and worse. A painful process for any parent.

It was really hard to see my son paralyzed. And he was getting worse and worse.

When Collin arrived his parents received horrifying news. The doctors explained that if their son had arrived just half an hour later, he would’ve gone into cardiac arrest and he might not have made it. While this is certainly good news for his parents who had been watching their son struggle to breathe, this was incredibly alarming and did little to calm them down.

My husband and I decided to have him transferred to a children’s hospital in Memphis. The doctors told us that if we’d have been thirty minutes later, he would have went into cardiac arrest. I thought I was going to lose him.

After a short wait the doctors were finally able to tell Collin and his parents what the cause of the paralysis was. Behind Collin’s ear was a tiny little tick. The tick had been slowly killing Collin but everyone had missed it. Just as quickly as the incident started, Collin was back to his old self once the tick had been removed.

ER physician Dr. Travis Stork explained that while tick bites are incredibly common, paralysis is a much more rare condition and is a reaction to the tick’s saliva. It was not related to Lyme disease.

This neurotoxin hangs out in their salivary glands, so while the tick is feeding, that neurotoxin gets into, in this case, Collin’s blood and that leads to what we call an ascending paralysis, which initially starts with the legs and an inability to walk.

While his parents were thanking the heavens for the doctors and their incredible work to save their son, Collin was quickly healing. Incredibly once the tick is removed, symptoms will quickly begin to disappear.

The minute the tick is removed, shortly thereafter, symptoms will start to improve.

Be sure to watch the video down below which talks about the incredible story and the signs all parents should be on the lookout for. It’s easy to forget that something as small as a tick can still be just as dangerous to your child as a huge dangerous animal.