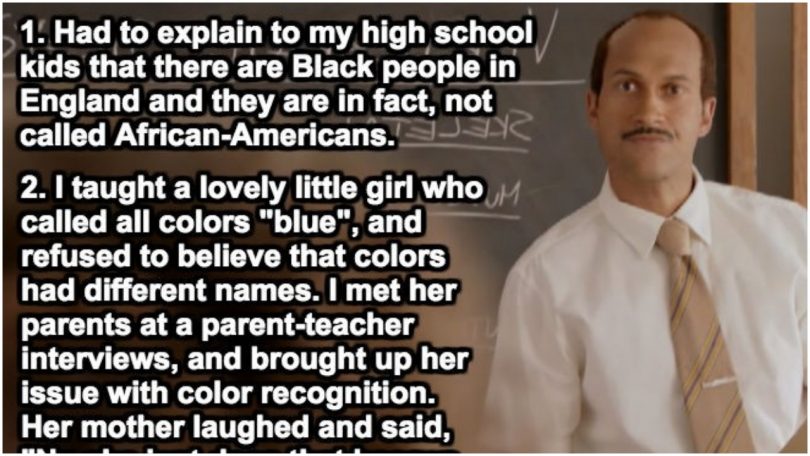 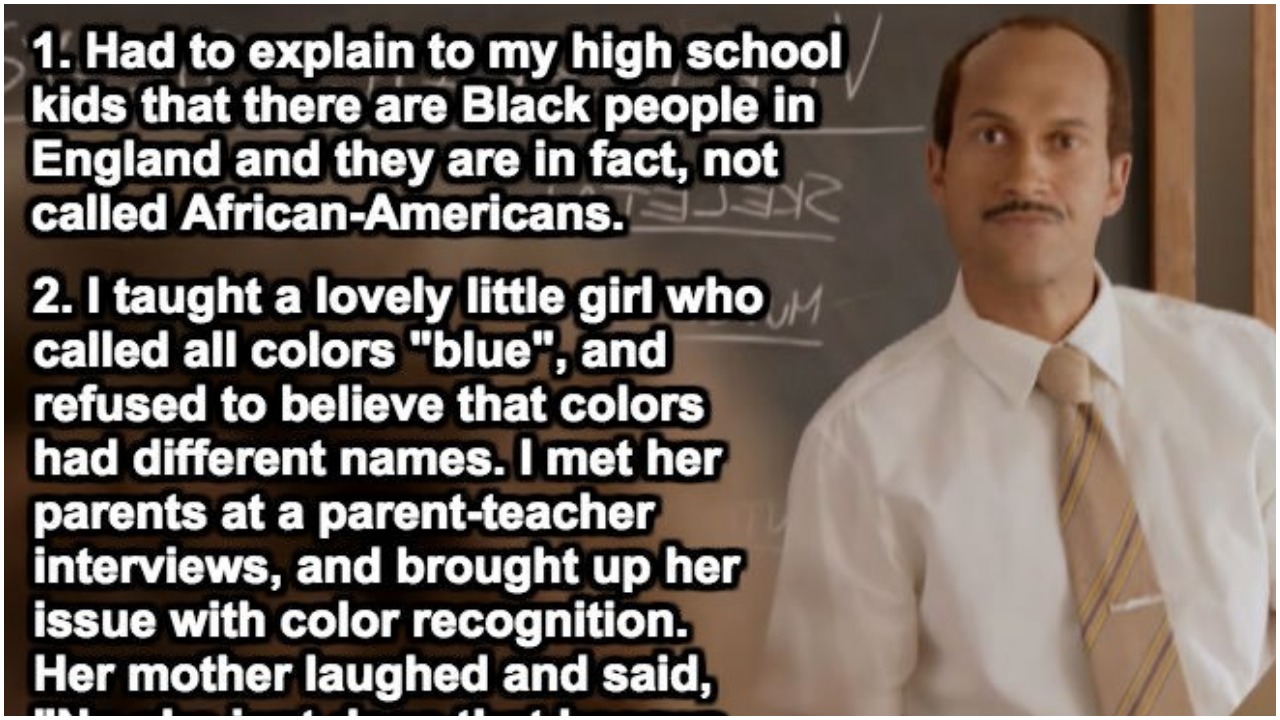 That when you pee you are supposed to aim for the toilet, not the floor, the garbage can, and for goodness sake please stop peeing your pants! You are in second grade! Also your poop is to go inside the toilet, not on the wall and how in the hell did you think to fling it on the ceiling!? Lastly, when you shit yourself in the second grade and act like nothing happened, everyone knows…everyone!

I had a girl in my grade 10 history class, and she was 20 years old. She wrote me a short essay arguing that Quebec shouldn’t separate from Canada. Her main argument was that if it did indeed separate, then people would have to take a boat to get there because of all the water that would be in the way. I wish I was making this up.

Plagiarism. I wouldn’t have even thought to look for it – after all, these were high school seniors I was dealing with – except that one girl who’d copied from Wikipedia had left the formatting in, and the cross-page hyperlinks were still bright blue.

I’m getting my master’s degree in Special Education. I want to do this because I am severely dyslexic. When I was diagnosed in 3rd grade, I was told I might never be able to read. I learned to read (finally) in 4th-5th grade. I got my BA in English, so you could say I made up for it.

I want to help kids in high school with learning disabilities. For now I’m a sub. I subbed a class once, about a year back. It was considered a “low functioning” class. I read the science chapter to them, like I was instructed. The entire time I had an 18-year-old kid with his headphone in, ignoring me and giving me attitude. Finally, I informed him that his lack of participation was going to go into my notes for his teacher. He got PISSED. He told me “I already know all this!!” I challenged him. “Prove it.” I said. It was time to go over the end-of-chapter questions, and I wanted to show him how much not paying attention can cost you.

He answered EVERY. QUESTION. CORRECTLY. And in explicit detail, might I add. I was floored. I was a new sub at the time. I would NEVER do this now, but after I assigned individual work, I came up to him in private and said “Why are you here?! This is a SPED class. WHY?!”

He simply said, “I can’t read.” It took me a while to believe him, but really, He could not read. That day he asked me for a ride home, and even though I was not supposed to, I agreed. His home turned out to be a homeless shelter. He had been struggling for YEARS under the care of his grandmother with alzheimer’s. His parents were gone. Drug addicts. His grandma was now too far gone to live with. I tutored him for free for several months after this. Smartest kid I ever met. He was reading at a 5th grade level when I had to leave him. I got him a new, fantastic tutor before I left.

So to answer your question, the saddest, most obvious thing I ever had to tell a student? “You’re smart Matthew. You’re the smartest kid I know. You know what? You’re going to be amazing.” He was convinced he was an idiot. I’m convinced he’s amazing.

And he is. Mark my words.

Elementary teacher here. Day one of first grade, I assigned some spelling homework. Kids fresh out of kindergarten don’t know what homework is. The twinkle left their innocent little eyes as I explained it.

Not every day is a win when teaching. Even in first grade.

These are some things I have had to tell my college students in the past year:

– Buddhism and Islam are two separate religions. Also Hinduism is not an extinct religion.

– Divine is not spelled “devine”. Yeah this one comes up a lot.

– What a thesis statement is

– Napoleon was not a Roman general

– Lying down on the ground and texting your girlfriend while in the middle of an exhibit at a major public museum is frowned upon by the guards. And also by me… but I was more… perplexed.

– When asked this question: “Should I be writing down this history stuff?” I simply answered “Yes. Yes you should.” I teach history.