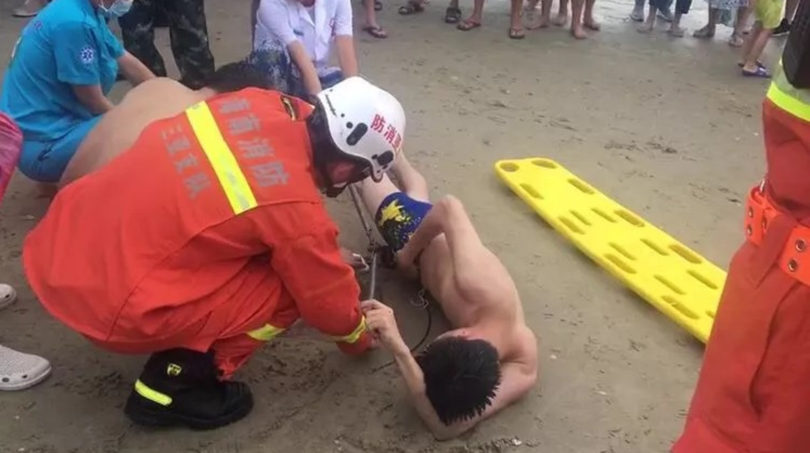 Pic shows: A fireman cutting off the ray's stinger This unfortunate beachgoer in China was left lying on the sand in agony after his genitals were jabbed by a stingray’s barbed tail as this viral video with over five million views shows. The unnamed holidaymaker was enjoying a sunny day in the tropical city of Sanya, in South China’s Hainan province, when the freak accident happened on 1st September. Footage from the beach shows the tourist unable to hide the painful expression on his face as countless others including police gather around to see his assess his injured genitals. Having just taken a dip in the sea, the man reportedly ran back onto the beach crying in pain after the stingray’s barbed tail found its way into his swim shorts and hooked onto his genitals. The video shows him lying prone on the sand with the stingray, whose exact species was not reported, nearby. A member of the Sanya fire service said he and his colleagues did not have the proper equipment to remove and unhook the spiny tail from the man’s private parts. "On the paramedic’s advice, we cut off the barbs with our tools," the fireman said, without saying exactly which of the man’s sensitive organs had been hurt.. The unfortunate tourist is said to have been able to stand immediately afterwards but soon followed the paramedics to hospital for a checkup. It is unclear whether the man was ever at risk of venom exposure, while the ray is thought to have died on the beach, witnesses said.
ShareTweet 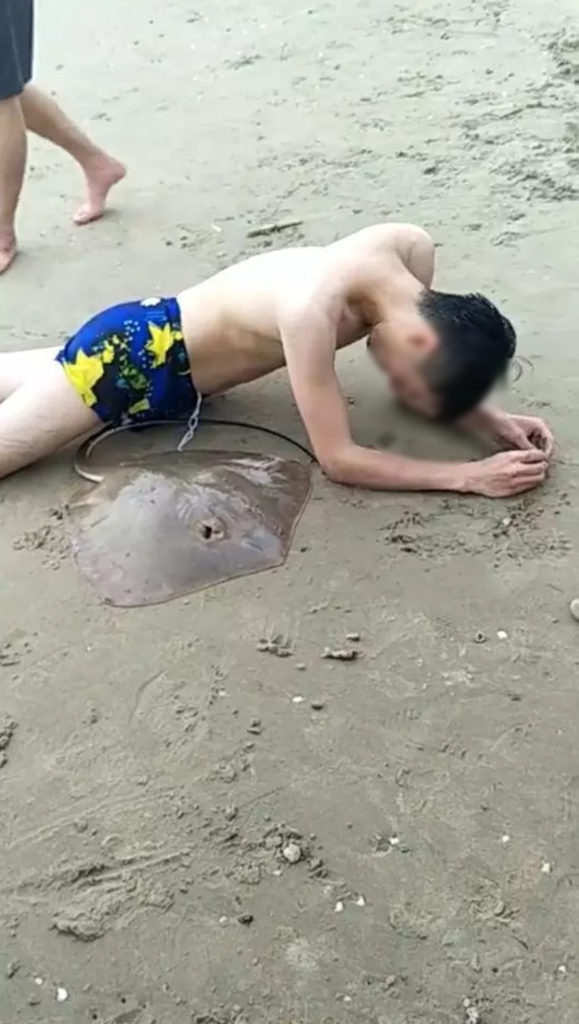 Forget that painful moment of catching your foot on a seashell at the beach, this poor guy has been left in agony after a stingray hooked on to his penis – ouch.

The unnamed man was seen rolling around on the beach in Sanya, in South China’s Hainan province, after his genitals were stung by the sea creature’s tail.

The poor bloke has just decided to take a dip in the sea to cool off on the sunny September day when suddenly he was running back on to the beach – stingray in tow.

The ray had managed to get its barbed tail stuck in the man‘s shorts and he was soon on his back in loads of pain.

The video, which has gone viral and racked up more than five million views, shows the bloke lying down with the ray beside him as the police, firefighters and other beachgoers rush to help him.

Unfortunately for the suffering man, a member of the Sanya fire service said he and his colleagues did not have the proper equipment to deal with the situation.

So, it ended up being very difficult to remove and unhook the spiny tail from the man’s penis.

The fireman said: “On the paramedic’s advice, we cut off the barbs with our tools.”

Stingrays can be poisonous, depending on the type, but one witness said it’s unclear whether the man was ever at risk of venom exposure.

It turns out there was more than one victim of the day – all of this happened while the ray is thought to have died on the beach.

Stingrays aren’t just the deadly creatures we imagine them today – sometimes they themselves are the victims.

See the video below: