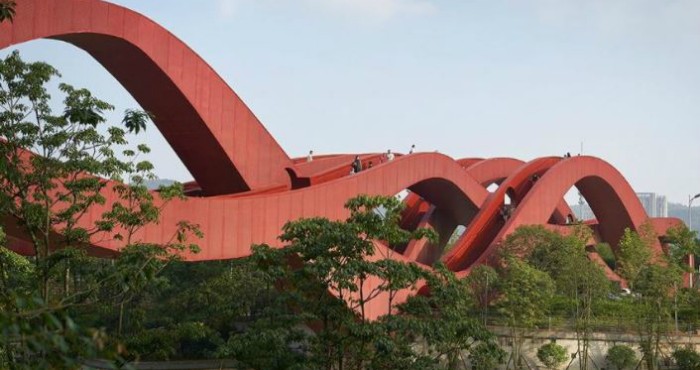 The world is full of structural man-made marvels. Just go to any city or globally renowned landmark and you’ll see a plethora of architecture that’s as fascinating as it is functional.

Of all the amazing feats of engineering that exist in the world, bridges are, by far, some of the most impressive. The fact that people are able to build massive suspended highways over water and land is nothing short of astonishing!

1. Lucky Knot Bridge, China: This steel structure’s looping design has three footpaths that wind up and down and connect two scenic parks. The design was inspired by the traditional Chinese art of knotting.

2. Circular Laguna Garzon Bridge, Uruguay: This unique ring-shaped bridge, which sits above Uruguay’s Laguna Garzon, was built to replace a much smaller crossing that only accommodated two cars at a time. This bridge, however, allows for 1,000 cars! The circular design also forces drivers to slow down. 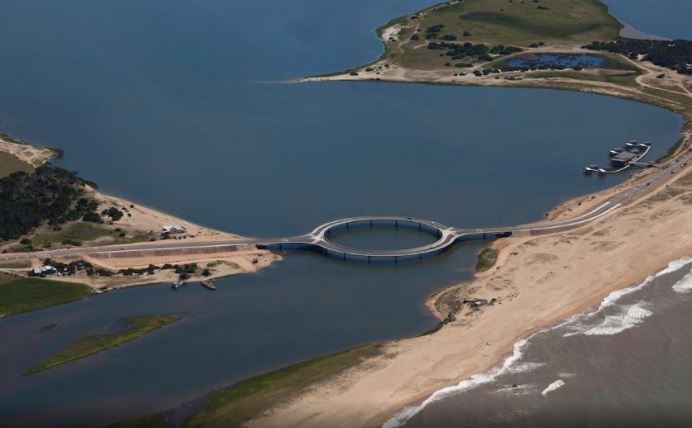 3. Twin Sails Bridge, England: This bridge spans the backwater channel in Dorset, England, and it features two 75-foot triangular lifting leaves that resemble yacht sails when they’re raised all the way up to let boats pass through. 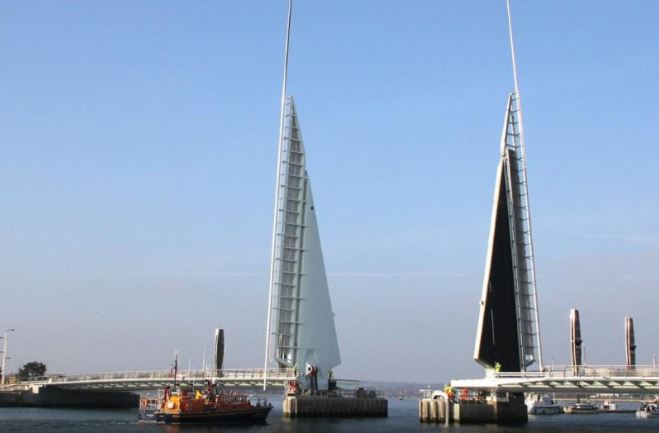 4. Eshima Ohashi, Japan: This roller coaster-like concrete bridge spans a mile across Lake Nakaumi in Japan, and it connects the cities of Matsue and Sakaiminato. The entire structure actually rises in one huge piece so ships can safely pass underneath. 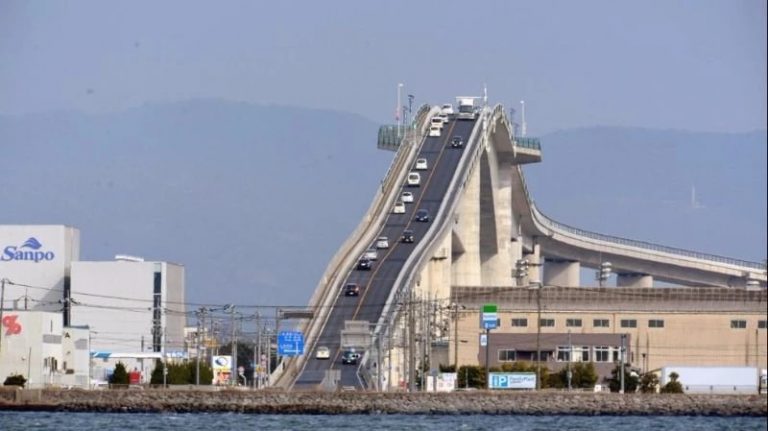 5. Dragon Bridge, Vietnam: Dragons have long been a symbol of power and fortune throughout Asia, and this bridge in Vietnam certainly proves it. It spans the River Han, and every Saturday and Sunday evening, the steel dragon literally breathes fire for spectators. 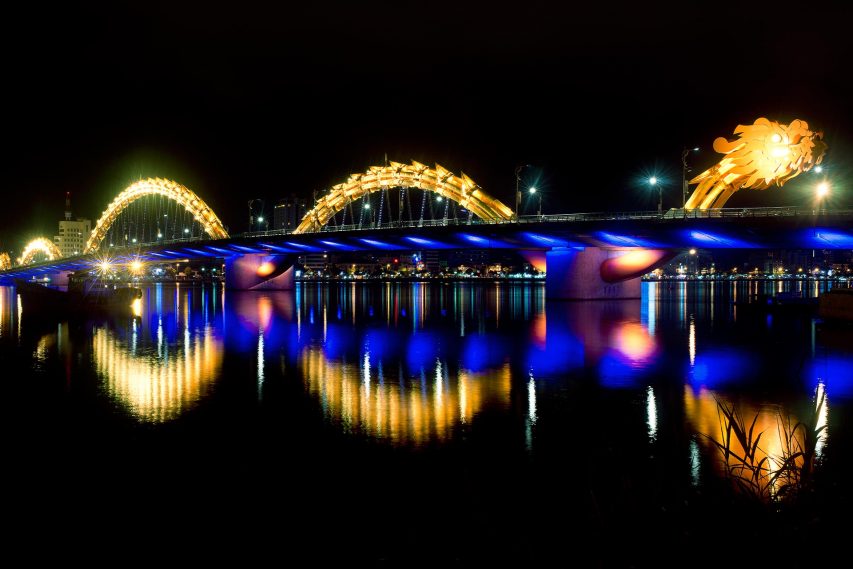 6. Island in the Mur, Austria: This odd-looking steel and glass structure links the two banks of the Mur River in Austria, but it’s far more than just a walkway. The bridge features a floating cafe, a children’s playground, and an amphitheater that hosts live events. 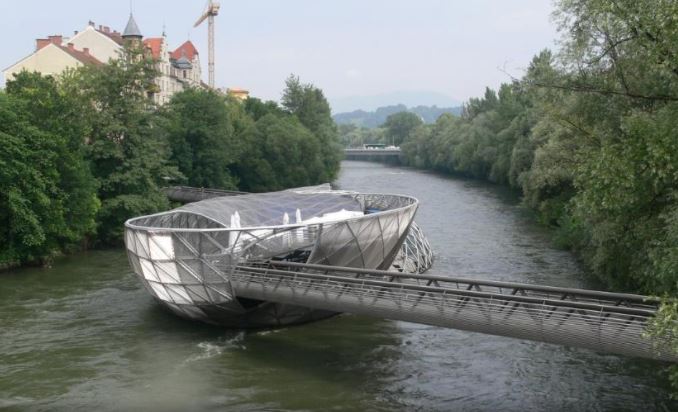 7. Rolling Bridge, England: This fascinating piece of architecture consists of eight triangular sections hinged in such a way that the bridge literally rolls up to allow boats to sail through, and then it uniquely unfolds again to create a pedestrian walkway. 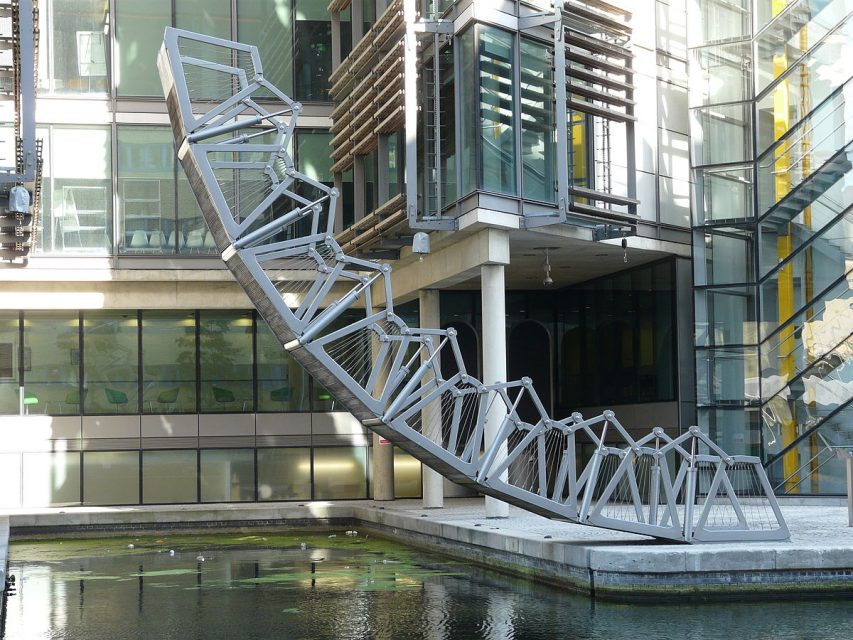 8. LEGO Bridge, Germany: Most of us remember playing with LEGOs as kids, but in Germany, there’s actually a bridge that looks like it came right out of a children’s LEGO set! Unfortunately, the bridge is actually made up of concrete beams simply painted to look like the colorful plastic toys. 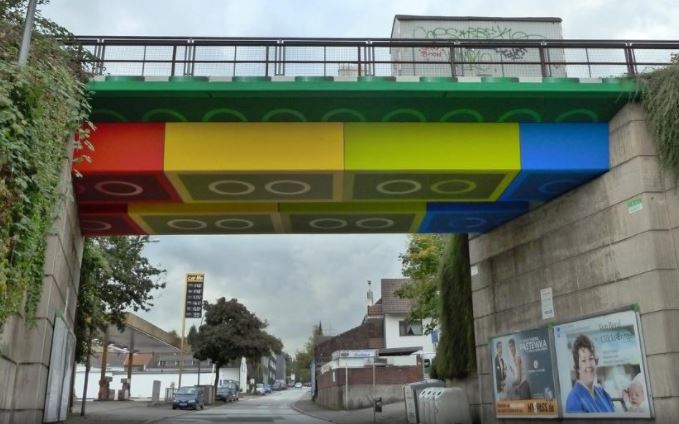 9. Living Root Bridges, India: In Meghalaya, India, there are trees whose roots have grown in such a unique way that they’ve created natural suspension bridges. The local Khasi people carefully train the roots to grow from one side to the other, and the entire process can take over a decade. 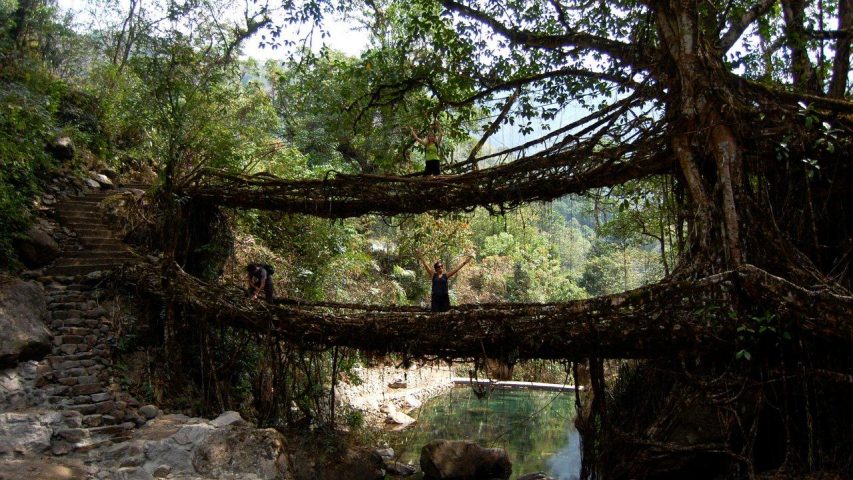 10. Banpo Bridge Rainbow Fountain, South Korea: The Banpo Bridge in Seoul, South Korea, spans the Hangang River, and spectators are treated to an amazing water and light show every day. The bridge has over 380 water jets that shoot 190 tons of river water every minute. 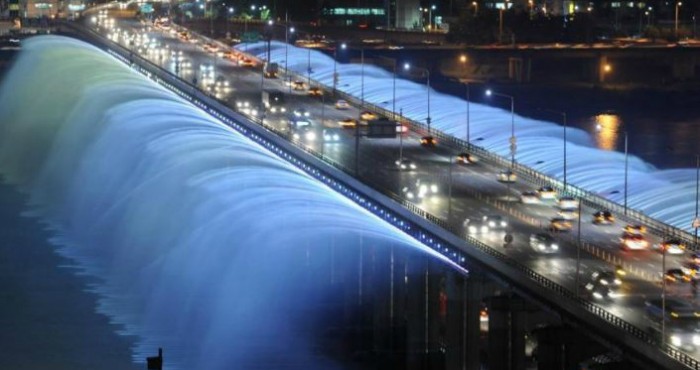 11. Slauerhoffbrug, Netherlands: This strangely-shaped bridge looks like it’s flipping pancakes! Two huge hydraulic cylinders allow this movable bridge to raise and lower throughout the day so ships can pass through safely. 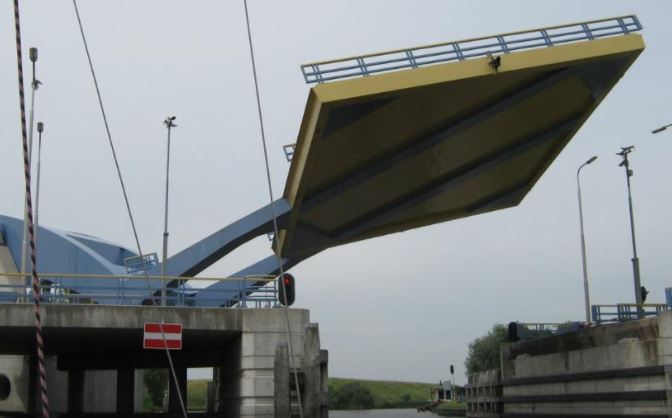 12. Moses Bridge, Netherlands: This sunken bridge is named after the biblical image of Moses parting the Red Sea. The bridge itself can’t be seen from a distance because the ground and the  water come up to its edge, giving people who cross it the feeling that they’re wading through the water. 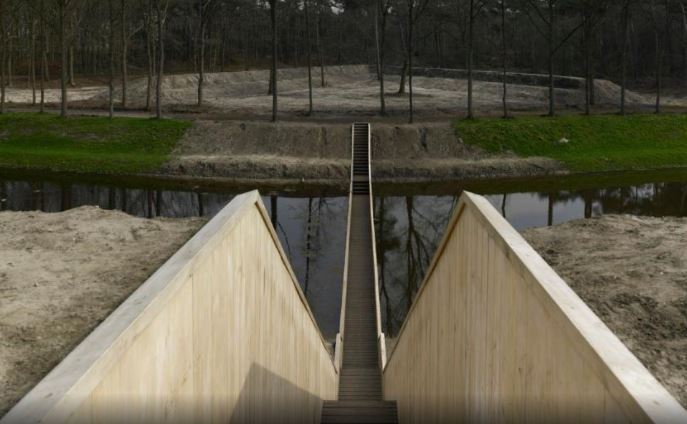 13. Henderson Waves Bridge, Singapore: This is Singapore’s tallest pedestrian bridge. The undulating curved “ribs” of the walkway double as alcoves to provide shelter to the public. The bridge is also illuminated with LED lights every night. 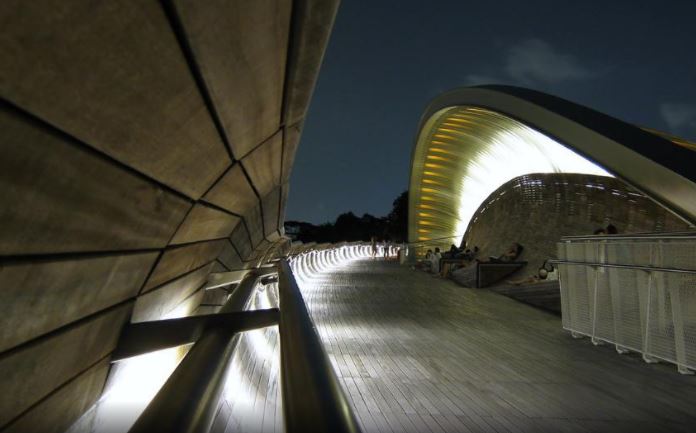 14. Gateshead Millennium Bridge, England: This pedestrian and cyclist bridge has become a landmark for the northeast of England. The structure consists of two massive arches that pivot around spring points to allow ships to pass through. 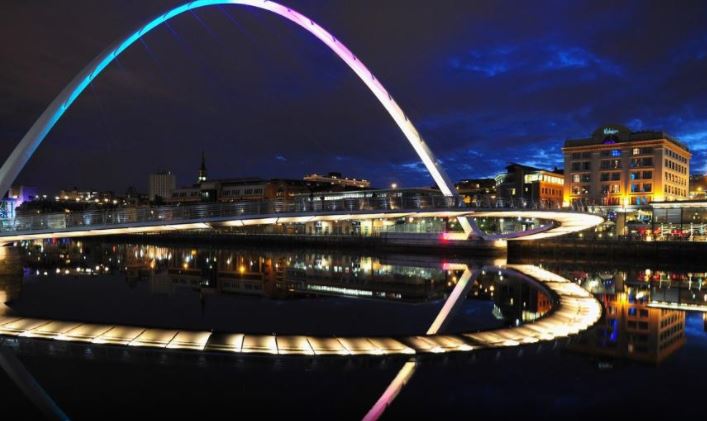 15. Øresund Bridge, Sweden and Denmark: This bridge is comprised of three parts: a bridge, an artificial island, and a tunnel. It has helped make non-stop travel between mainland Europe and Sweden a reality. 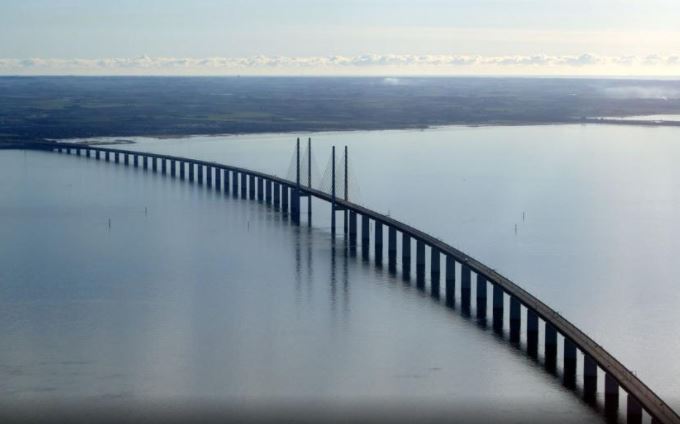 16. Falkirk Wheel, Scotland: This structure is the world’s only rotating boat lift, and it connects two massive canals in central Scotland. The enormous wheel lifts boats nearly 80 feet up; the vessels must pass through a pair of locks to get to the other canal. 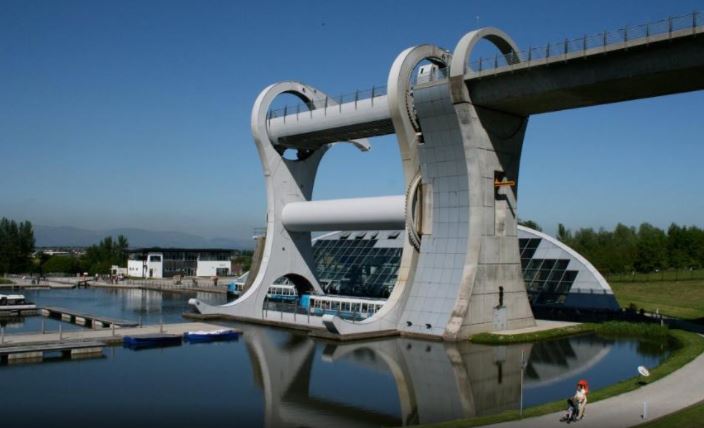 17. Python Bridge, Netherlands: In 2002, this unusual snake-shaped bridge in Amsterdam—which spans the canal between Sporenburg and Borneo Island—actually won the International Footbridge Award. It’s not hard to see why! 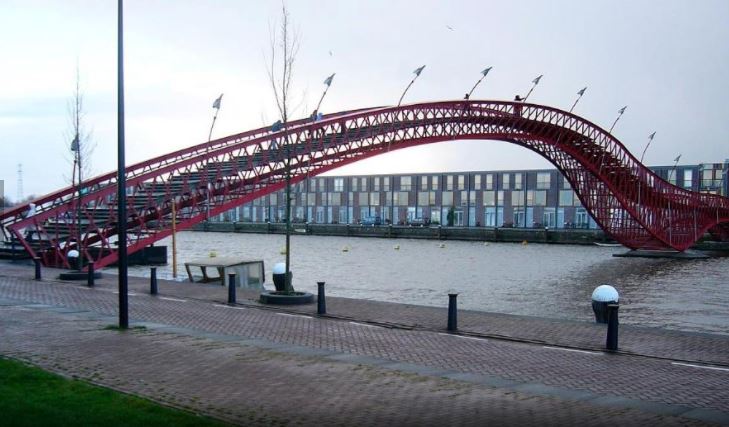 18. Octavio Frias de Oliveira Bridge, Brazil: This cable bridge in Sao Paulo, Brazil, was built over the Pinheiros River. Every December, lights are strung up on the cables and illuminated to create awesome color effects similar to an enormous Christmas tree. 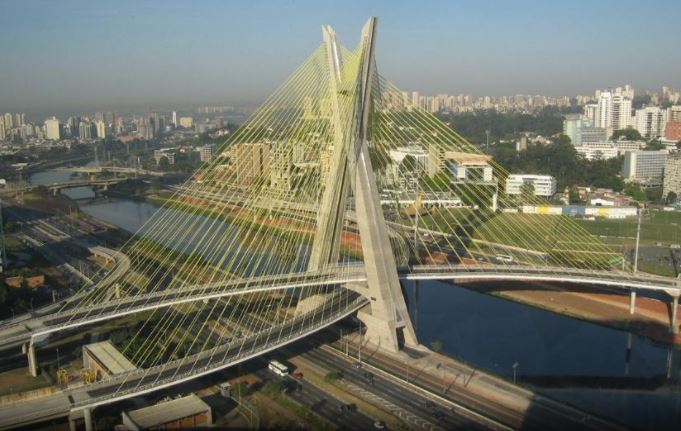 19. Infinite Bridge, Denmark: Depending on the tide, this circular wooden bridge is sometimes elevated just above the surface of the ocean. It’s actually a popular place to get married because it provides stunning 360-degree views of the surrounding landscapes. 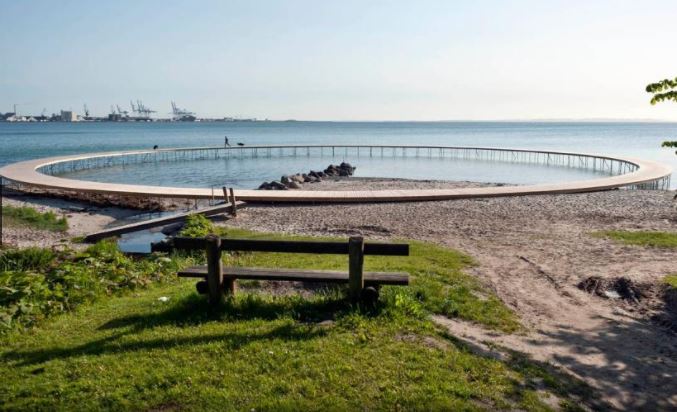 20. Natural Bridge, Kentucky: This stunning natural sandstone arch is extremely popular with tourists. The bridge has stood for thousands of years, and some geologists even believe it could be upwards of one million years old! 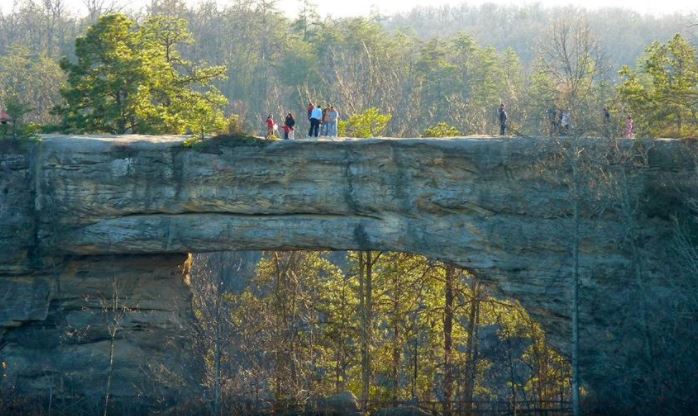 These bridges really show how far humankind has come with architectural technology. It almost seems like anything is possible nowadays as long as there are people willing to try to build it.<br />
Share these awesome bridges from around the world with your friends below!